So,
I received many e-mails yesterday urging everyone familiar with the Jena Six case to wear all black today in protest. Not familiar with Jena Six? Basically 6 black teenagers from Louisiana have been jailed and could face life in prison due to a series of racially charged events that culminated in a fight with a white student. While the boys did participate in some pummeling, many protesters contend that their charge, attempted murder, is too harsh for the crime.
The urge to wear all black is a political as well as a fashion statement, and I decided to show my support (I have plenty of little black dresses in my repertoire, so didn’t find it hard…) but wondered if others supported as well. I went out during a brief lunch break…

…to see what I could see.
Surprise: the all black was in full effect!
Kelly, an executive assistant…

…looked smart in glasses, a black dress, and silver flats.
Shakema and Elizabeth… 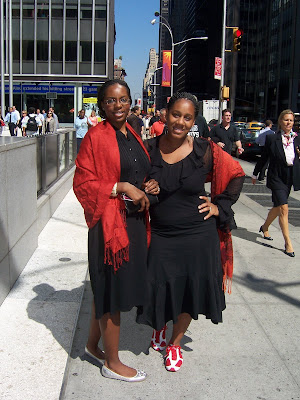 accented their all black with bright orange shawls.
Attorney Gigi… 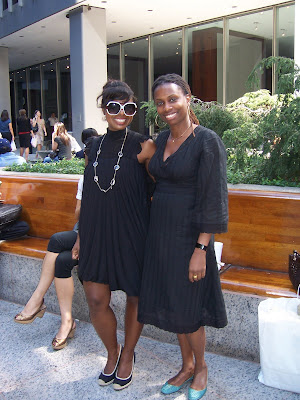 …accent their black with cool retro specs and necklaces.
Cute!
A few people didn’t get the memo.
Accountant Andre… 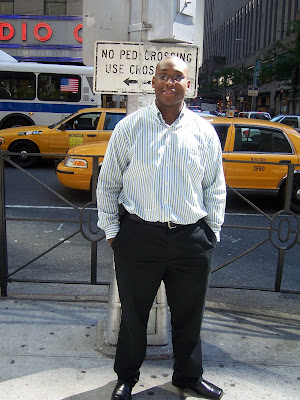 …said he didn’t know that people were wearing black. Besides, he said, he’s from Jamaica, and was unaware of the national news.
And lastly, Cherise, right, was in all black… 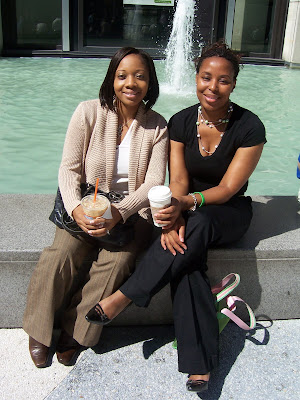 But her friend, Natalie, said she just didn’t know!
A bit of a mixed bag, but it seems that people (in midtown at least) dusted off their old black pieces to show their disdain for a sad case in racial politics.
How’s it look where you are?
Smootches!
PS Not familiar with the case? Read about it here and here.
PSS Send me pictures!