Adriana took in the Milly by Michelle Smith show last night.
Enjoy!
****************************************************************
When I walked into Milly’s Spring/Summer 2009 show, the first thing I noticed was a tall, dramatic Moorish arch painted at the top of the runway. Subtle orange lighting and moody, Arab-influenced music also set the tone for what I thought would be a sartorial Moroccan adventure. Imagine my surprise, then, when the show began and, instead, the lights went super-bright and the music changed to blaring sixties rock. As models sporting raffia cotton, crocheted beanies, and trippy prints began to stride down the runway, it became clear that the bernous and fezes I expected were not to be.

Milly’s collection carries Barneys’ upcoming holiday theme, “Have a Hippie Holiday,” right on through to spring. Billowy peasant dresses, tie-dye, and seemingly homespun embroidery, among other things, dominated the Moroccan influence, which was certainly present in the caftans, lace patterns, and some of the hues. It was clear, however, that designer Michelle Smith took the bulk of her inspiration from the era of flower power and free love (though I learned that her trip to Marrakesh was indeed the likely inspiration for the stage’s setting). 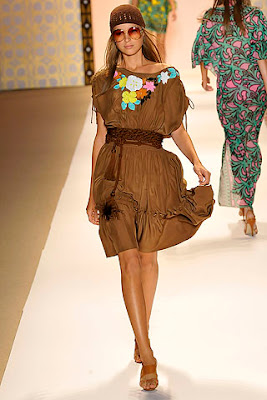 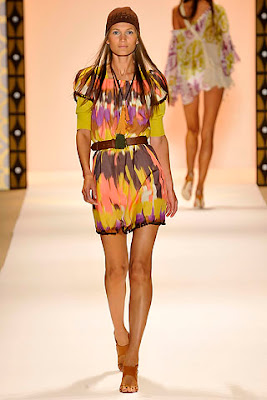 Smith balanced the sixties hippie look with more conservative, streamlined pieces that took their cue from the non-rebellious part of the population during that decade (think”Mad Men”). Nehru-like jackets, silk chiffon blouses with ruffled neck ties, and A-line skirts were done in uber-feminine silks, sateens, and jacquards to satisfy the Milly fans who love the label for its classic feminine tailoring with a vintage feel (like me). 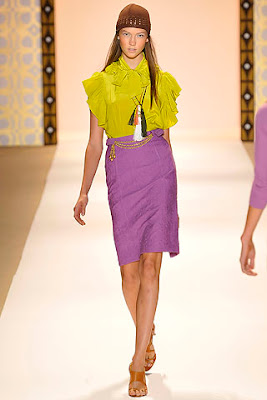 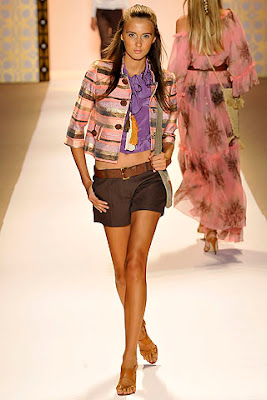 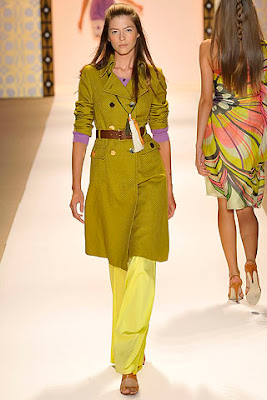 There was nothing really groundbreaking about the collection as the sixties have been done so frequently as to not be much news to anyone. There were some standout pieces, though (a persimmon-colored ruffle sleeve dress, below) and the music itself was so good that I had to ask one of Milly’s reps if they would post the playlist on their Web site when they showcase the collection on it. I saw quite a few heads bopping to it along, too, and while the show’s clothes may not have made waves, it certainly made watching them a lot of fun. 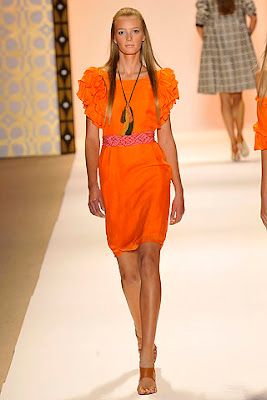