Hey!
So on Tuesday, I asked you guys to send in pictures of what you wore to vote or pix of yourself after you finished voting. A few of you sent in some fabulousness. Let’s check it out!
First Adrienne says, “I am a sophomore at Tuskegee University! Since this is my first presidential election, not only did I have to vote, but I had to look cute and represent Obama as well!”

“… The shirt has a picture of Obama as a card and it says “If America plays its cards right, not only will it make history, but we’ll make a positive change in America!” I also have on a cute red jacket and red velvet flats with a lace and plaid scarf. I hope you like and I really hope that me and Obama win!” Well Obama won…I think Adrienne’s a winner too!
Reader AJ snapped a pic in her car: 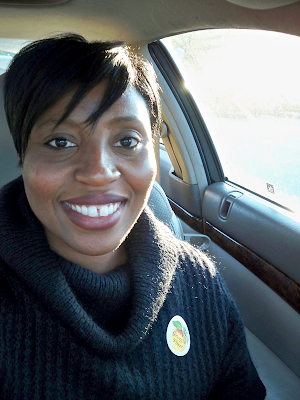 She says, “I’m a voter here in Atlanta and I stood in line for 1.5 hours to help turn my state BLUE this election. Here’s my voter pic and you’ll see I have the sticker to prove I came, I saw, I conquered early voting in Georgia.” That’s right!
And lastly Lady B sent an e-mail with the subject, “My Voting was Priceless“…

She says, “I know you can’t truly see my fit but I’m so proud of myself and our people for stepping up for a change!” And it worked!
Well I think everyone should get a Fashion Bomb T just for voting and sending in a pic! But there can only be one winner of the Pink Cherie earrings. Who should it be? Leave a comment and let me know!
Bisous!