As the year comes to a close, it’s time to look back at which trends we’d like to bring with us to 2010, and which should stay firmly in 2009! The Fashion Bomb has compiled the following fads, but you tell us: Should we take ’em or leave ’em? Whether you blame it on Balmain or Beyoncé, metallic trimmed bandleader jackets dominated catwalks and sidewalks in 2009, spawning look-a-likes by everyone from Alice & Olivia to Target.  While the cut was definitely cool, I’d have to give a strong side eye to anyone rocking the exact braided, multi-button look in the new year. This hot trend is ovah–leave it in ’09! 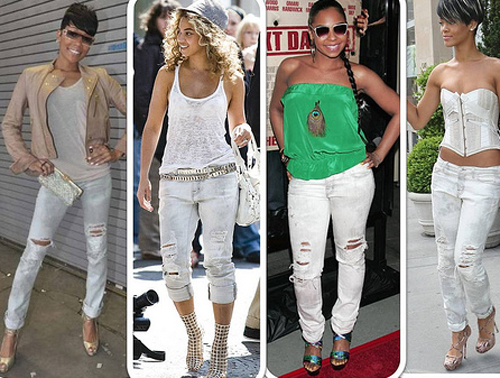 Every celeb from Ashanti to Rihanna was spotted wearing ripped jeans this year, most notably J Brand’s Thrashers as pictured above. The rocker look is a recurring trend that always exudes chic edginess. Let’s take it to 2010! Open Toe Shoe Boots played up both dresses and skinny jeans in 2009, but I’ll be honest, the look always confused me. The cut could be more stifling than sandals in summer months, and in winter, your toes will freeze! Of course fashion standouts Rihanna and Ciara managed to make the stompers look hot, but hmm, not too sure illogical accessories need to endure into our new year. Save your time and money for things that never go out of style like coupons for cologne, perfume and makeup. Leave ’em in 2009! 2009 saw multiple celebs, most notably Amber Rose, rocking leggings in every color, style, and sheen imaginable. Purple or green, ripped, laced, or zipped, leggings were worn under tunics but more often as figure illuminating, butt lifting pants. I’ll cosign a legging for a comfy weekend ‘fit, but personally think spandex leggings as pants should not endure. Leave ’em in 2009!

What started in music videos and onstage trickled down to the masses with regular around-the-way girls opting for leotards and stockings in lieu of traditional skirts or pants.

Unless you’re Lady Gaga or Beyoncé, it would be wise to back away from the glorified panties. Leave ’em in ’09. 80’s era shoulders breathed fresh air into fashion in 2009, adorning dresses and jackets with a seemingly cutting edge flair. The strong, sophisticated cut is too flattering  and chic to die away so soon. Let’s take it to 2010!

Now guys, you had your own share of trends too! Our fave men’s style icons have been embracing the prepster cardigan look, and you’ll hear no complaints from my end! Piped, cable knit or purple, this look works. We’ll discuss the big chains later, but your cardis can stay. Let’s take ’em to 2010! Kanye West tried his hand at designing sneakers for Louis Vuitton, and the colorful kicks were a certified hit amongst hip hop heads. Creating a bomb product, as well as supporting and rocking said product with purpose is definitely a trend I can cling to. Let’s take it to 2010!

What do you guys think? Which trend would you take? And which would you leave in ’09?