Tibi’s designer and founder Amy Smilovic began in fashion after moving to Hong Kong over ten years ago, and Asia’s influence continues to weave its way into her designs. Viewing their Spring offerings, I was reminded strongly of nineteenth-century colonial Hong Kong: butterfly prints, Chinese reds, and Mandarin dresses dotted the runway, along with jodhpur-like Officer trousers and wide, tasseled, waist-cinching belts.

There was also an element of Katharine Hepburn and the 1980s, as well, in the shoulder-padded blouses and boxy blazers (which were reminiscent of early Giorgio Armani). Aside from a few pieces that ran toward the kitschy, I was pleasantly dazzled. The piece de resistance was a floor-length, jade gown with an applique design that was stunning in both its color and fluidity. 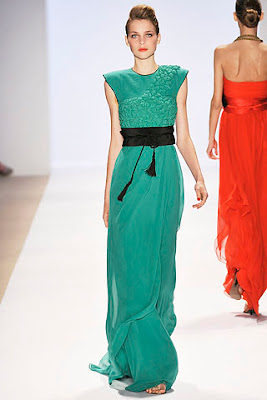 The clothes seemed perfect for a worldly, bohemian jetsetter, as at home at a Turkish bazaar as she is on the Vineyard (or her Hamptons backyard). Models Han Jin, Chanel Iman, Tokumbo, and Lakshmi Menon, among others, carried the clothes off beautifully and also added diversity to the runway, continuing a (heartening) trend I’ve been seeing all through Fashion Week.
Here are more stand-out looks: