New York City dawned gray and wet as the fifth day of Fashion Week rolled in. It was the perfect day to visualize sparkling white sand, clear blue water, and the tranquility of the beach. Luckily, I didn’t have to go farther than Iodice’s Spring/Summer 2009 show to do so, which was not surprising since the label cited their inspiration for this collection as being the lost city of Atlantis. 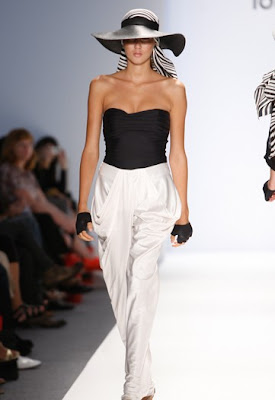 Iodice is a contemporary Brazilian label known for its denim and simple sophistication, with special attention to easy, feminine silhouettes. The show’s atmosphere was a bustling, excited one as many people new to the Brazilian line seemed to be in attendance. The show was held in the Salon of the Bryant Park tents, the most intimate of the three runway show venues. I could see everything clearly from my seat and, like being up close to a painting in a museum, it made all the difference in observing the clothes’ craftsmanship. The color palette consisted of only five discernable hues: sand, white, deep turquoise, jet black, and a pale mauve. Silk tops with Origami-like folds and ethereal goddess dresses were shown alongside clean-lined trousers, skirts, and dress shorts. The accessories (no jewelry; fingerless gloves; open-toed, strappy, metallic pewter shoe boots) were minimal and added an edge that saved the presentation from being too delicate. Iodice being a Brazilian label there were, of course, several sexy bathing suits and beach ensembles included. 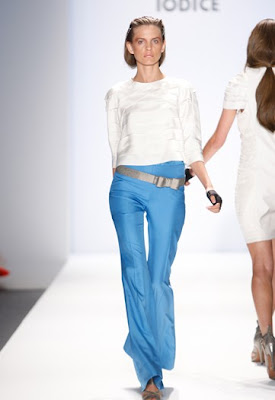 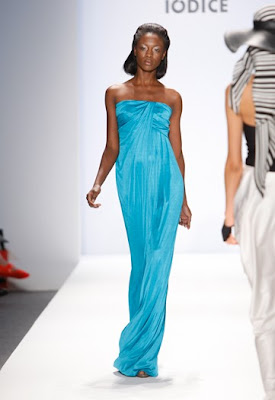 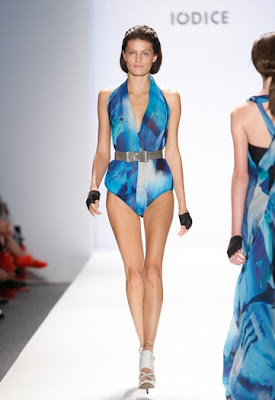 It’s clear that the label would like to replicate its popularity in Brazil here in the States, and likely designed this collection with American consumers in mind (the clothes’ many references to early Halston, Calvin Klein, and Donna Karan seemed to indicate such). Some of the tailoring and draping could have been smarter, and there were a few garments that seemed a bit too derivative, but overall it was a sound collection with pieces that whispered ‘sophistication’ instead of shouting it.

As they say in Brasil, ate logo (until later)!
-Adriana