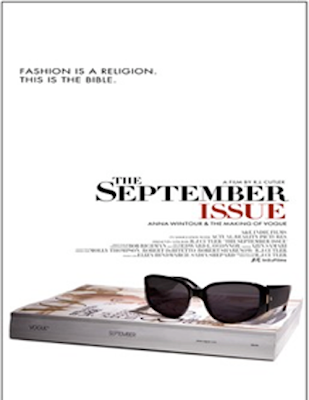 “It’s bold. It’s iconic. It’s Legendary. The September Issue of fashion Bible Vogue has become one of the most anticipated annual books within the fashion industry, on par with Vanity Fair’s March Hollywood Issue. Every year it promises more; who can forget the 2004 issue that, for the first time in ages, featured models on the cover (including Ethiopian stunner Liya Kebede)? For the first time Vogue editrix Anna Wintour has allowed cameras in her hallways. Filmmaker R.J. Cutler and his team have compiled a documentary chronicling the making of the 2007 issue, the biggest ever. “The September Issue” premiered over the weekend at the Sundance Film Festival.“

“Cutler says of Vogue,”My observation with the creativity in the hallways and offices is that Vogue is like the mist. You don’t think it’s raining and all of a sudden you’re soaking wet.”
Cutler compiled the film out of 300 hours of footage that followed not only La Wintour, but her ingenue daughter Bee Schaffer, and Creative Director Grace Coddington. The commentary revolves around the tight ship that Anna Wintour obviously runs. Cutler promises an unbiased portrait of “The Pope of Fashion” and her staff by acknowledging the glamour involved, but highlighting the grueling hours of work required in assembling such a massive publication.
Check out the videos below in which Anna answers pre-selected questions at the screenings Q& A and an exuberant fan gushes over the film: