A fashionable friend wrote me recently, saying, “Are the tents losing their luster? I blame Project Runway!! What do the tents mean today? I mean come on, She by Sheree??? And meanwhile Sass & Bide, Betsey Johnson, and Vera Wang are dropping out?? What?!”
LOL, he’s a bit dramatic, but he makes a good point.
What’s going on with Fashion Week? 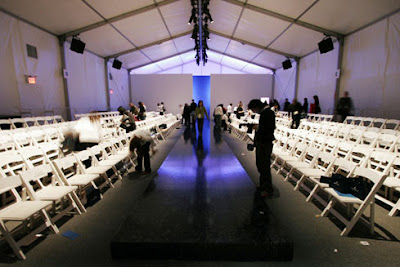 Rather than this being an indication of a decline in prestige, I think designers are simply victims of tough economic times, just like everyone else. And I’m not too sure I buy that whole She by Sheree thing…I’ll believe it when I see it! Besides, plenty of tent regulars like Nanette Lepore, Tracy Reese, and BCBG are still showing.
But what do you think? Are the tents becoming less prestigious? There are some who argue that since we can view the collections online, we can do without the hustle and bustle….

*A bit of history on the tents: New York Fashion Week was created in 1943 by a well known publicist named Eleanor Lambert, who created a Press Week so that journalists and editors could see and write about American designers (who, at the time, played second fiddle to French designers). Press Week ended in the 1950’s, and afterwards, individual designers were charged with putting on their own fashion shows in loft spaces, clubs, or restaurants (a trend that continued well into the 90’s). Understandably, jamming several people into a cramped loft space proved quite dangerous, and in the Spring of 1994, Fern Mallis, Vice President of IMG, sought out a single venue where all the shows could take place. Thus Bryant Park Fashion Week was born. Now the event allows editors, writers, and buyers a chance to see the newest American designs in one centralized location. Nice, but in the digital age, is it necessary?
Source