Happy Wednesday, folks!
I just got back from a quick but beautiful trip in sunny LA, and on my flight back home, I tuned in to the Tyler Perry comedy Nobody’s Fool, starring Tiffany Haddish, Tika Sumpter, Amber Riley, and Omari Hardwick. While the film was amusing, I was most intrigued by the style of Tika Sumpter’s character Danika, a fashionable ad exec. Leaning on a palette of blacks and grays, Tika managed to look corporate and sexy, mixing authority with style. I was lucky to have the chance to chat with Nobody’s Fool Costumer Designer, Crystal Hayslett, to talk about her process of creating the look for Danika’s character (and also how she nabbed such a dope job)! About her gig, she said, “I started at the bottom. I was a production assistant for Tyler Perry Studios. I was answering phone calls, running errands, going to get breakfast for the designers, doing returns, and basically doing all the grunt work that production assistants do. I started by dressing background characters, and that’s where I really got more of an understanding of how sets work and learned a lot of the fundamentals of being on set. From there I became a key costumer and that’s when I started dressing main cast members. Mr. Perry saw my work ethic. I got a call one summer when we were off and the President of the Studio called and said Mr. Perry asked if I could be their costume designer. That was in 2015 (and I haven’t looked back).” For those looking to do a similar job, Hayseltt offers, “Go to school for fashion, work in retail. I had a background in retail and I was a public relations major. I knew how to talk to people and how to dress people. It’s important to know how to make people comfortable and trust you when it comes to your ideas. Once you have that background, then network. People hit me all the time on Instagram. I’ll give people internships or if I see they have a great background, I’ll give them a job. But really, it’s important to network and know the right people.” Now, let’s talk about Tika Sumpter in Nobody’s Fool! Hayseltt says, “Tika is not a hard actress to dress. For her character, she is dressed in New York. New York is dark, people where dark colors, nothing too bright. I wanted her to be very chic. I wanted nice silhouettes and things that made her look good, still with some type of sex appeal as a working woman.” 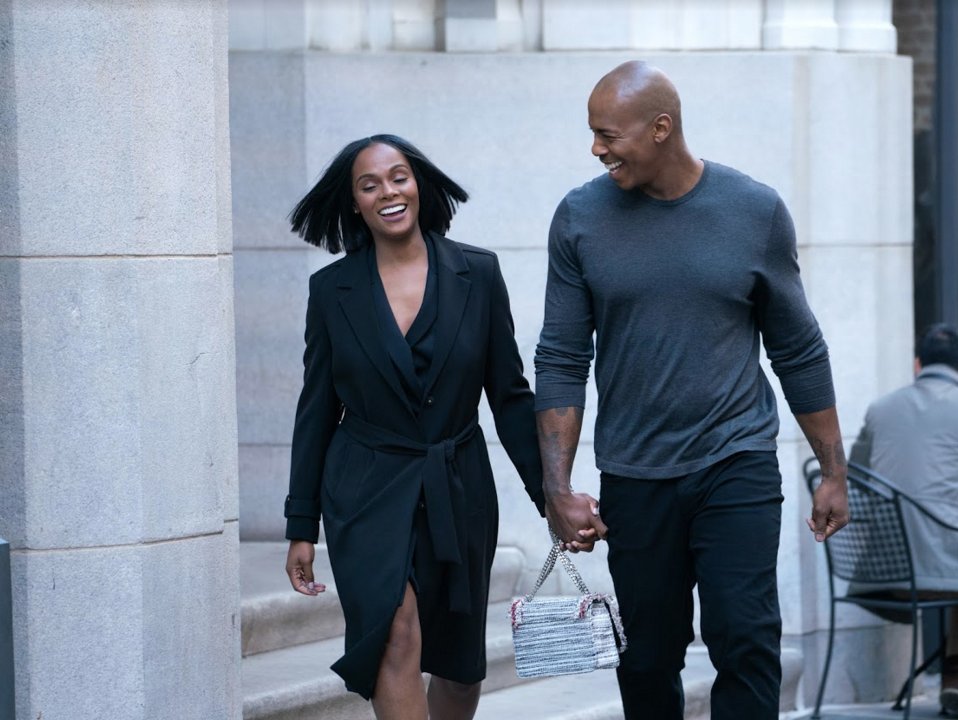 She continues, “I try to design for the every day working woman. I want them to look on the screen and say, “I can buy that,’ and know it’s not outrageously priced. Brands we used included Zara, Bloomingdales, Madewell, mixed in with some pieces from Saks and Neiman.” If you’re looking for the perfect corporate chic look, Hayslett offers, “Every woman needs a nice pencil skirt, good stiletto heels, and a nice turtleneck. A style dresses, sheath dresses, peacoat or overcoat, handbags are the woman’s statement piece. Handbag and shoes are the pieces that make a statement. Jewelry is also something important in bringing it together. Find pieces that go with everything.” And her favorite look from the film? “A light pink pencil skirt with a big bow by Ted Baker. She wore a pair of Christian Louboutins with it and a fitted turtleneck from Nordstrom. One of my favorites. It was such a statement piece. It has a big bow, but it was still subtle and powerful” Alright! Be sure to follow Crystal at @LuvCrystalRenee and if you haven’t watched Nobody’s Fool, The DVD is available on digital now and comes out on Blu-Ray February 12th. Check out the trailer below: Fashion Bombshell of the Day: Regan from NYC All of the Fashion From the Real Housewives of New York Season 12 Reunion: Ramona Singer in Yigal Azrouel, Leah McSweeney in Saga NYC, Dorinda Medley in Balmain, and More! Make Cash from Your Closet with Poshmark + Shop Claire’s Closet!