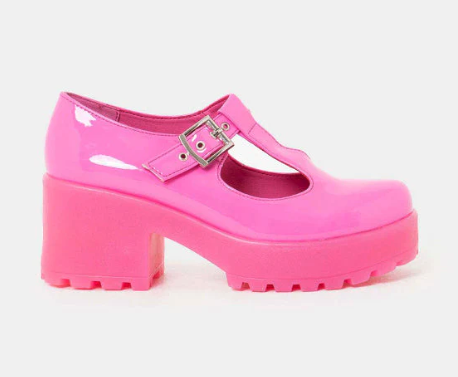 2022 has brought the return of Mary Jane shoes. These shoes have fast become a footwear staple in many wardrobes across the country. They are a practical, fashionable style of shoe that is known for the iconic ‘bar’ strap across the front.

But where have Mary Janes come from? And how do they fit into 2022 fashion? Here is the ultimate guide to everything you need to know about Mary Jane shoes and why they’re now a footwear essential again.

A brief history of the Mary Jane shoe

Before we talk about the current fashion trend of Mary Jane shoes, we thought we’d take a look at where they came from and how they first rose to popularity. Mary Jane shoes were formerly called ‘bar’ shoes and were worn by both boys and girls as early as the 19th century. Popular amongst school children, the Mary Jane shoes weren’t commonly worn by women until the 1920s.

Mary Janes were a common choice of shoe for 1920s flapper girls. This era saw Mary Jane shoes rising significantly as a fashion trend for women. But how did they go from ‘bar shoes’ to the name we know them as today? Well that’s thanks to the Brown Shoe Company in 1904. This company named their bar shoes after a cheeky cartoon character called Buster Brown. This became a marketing tool for the company and thus the iconic Mary Jane shoes were born!

How 2022 has brought Mary Jane shoes back into fashion

In a world where fashion is ever changing, sometimes classic styles are brought back and reinvented. Mary Janes are no stranger to this as this year has seen them come back with booming popularity, particularly amongst gen z.

But why have Mary Janes become so popular again? We think this is largely due to the versatility of them. Easily paired with tights, socks, dresses, and skirts, there are endless ways that Mary Jane shoes can effortlessly elevate an outfit. They also fit nicely into many gen z aesthetics such as kawaii and dark academia themes.

One of the ways why Mary Jane shoes rose to popularity this year is through a reimagining of their classic silhouette. Adding in modern elements to traditional styles is a great way to bring an older style back into fashion for modern audiences.

Here are some of the twists we’ve seen on Mary Jane shoes in 2022.

Another style of Mary Jane shoes is the double strap, which adds an extra bar to the traditional singular. This adds an extra element of sturdiness to the shoe alongside a slightly different look which many love.

Mary Jane shoes were traditionally made with patent leather or black leather, but many footwear brands have come out with different materials for an alternative look. A popular one is suede, this velvety material is great for a winter style.

Some footwear brands have even gone the extra mile to create funky coloured Mary Janes with wacky prints on them. This style of Mary Jane came into popularity this year and doesn’t seem to be leaving anytime soon!