Like Rock & Republic, Miss Sixty is a denim label known for its jeans and sexy contemporary wear. Unlike R&R, however, this collection was, unfortunately, not very cohesive or appealing. While there were individual pieces that merited some note, the clothes as a whole were an example of what happens when a label designs too much for the runway and not enough for the consumer, surprising since Miss Sixty is normally a very accessible line. 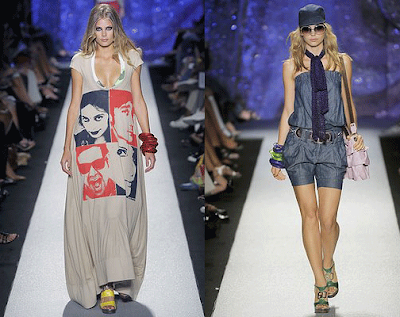 A seemingly random hodgepodge of influences, from hippie-chic to 80s fads to punk rock (and more), marked the collection, as did stripes, plaids, psychedelic sixties prints, and graphic designs. Denim appeared in the form of vests, genie pants, and rompers, and the outfits were set off in large part by clunky, high-heeled, open-toe boots paired with multicolored, striped knee-high socks (Are you dizzy yet? I know I was and it wasn’t the flashbulbs this time). There were one or two things you could wear on their own (I thought the colored visors added a playful retro touch, and pair of blue and red-striped tights were fun and made me crave fall weather), but for the most part it was a disappointing show: 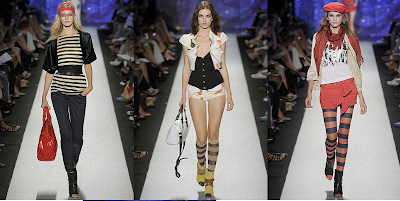 But you be the judge F’Bers…
-Adriana