Hey My Damies!
So believe it or not it took me all weekend to recover from the excitement of the Murakami Gala opening! It was absolutely amazing to meet and mingle with the fashionable set right in my backyard. I was *thrilled*. I didn’t get much time to go out and capture Real Style, but you guys always come through! Today, check out Shariba from Silver Spring, Maryland…

She says, “Here’s an example of my personal style. Please tell me what you think honestly!!”
I love the shirtdress mixed with your designer clutch, and your bold white boots are quite the chic choice. The dark sunglasses only amplify your outfit.
Two snaps!
What do y’all think?
Smootches!

*A lot of you were like, “Claire how was the rest of the Murakami event? Did you go to the exhibit?” Yes, of course, aside from chatting with Marc Jacobs, I took a twirl around the exhibit itself!
The night started off with a press junket, and the backyard of the museum was set to look like typical Chinatown street stalls selling fake Louis V bags… 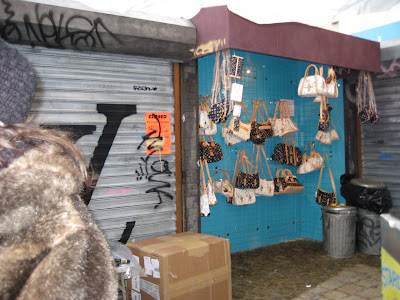 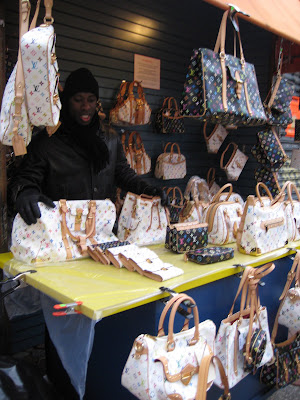 …while the bags were made to look fake, everyone working there insisted they were real. Honestly, at first glance,Â I couldn’t tell the difference! As we’ve discussed, I’m no stranger to China, Chinatown, or fakes (though I’ve reformed!), but when I first took a look around, I said to myself, “If you can get a great looking fake, why shell out the dough???” Chairman and chief executive of Louis Vutton Yves Carcelle spoke a bit about the display… 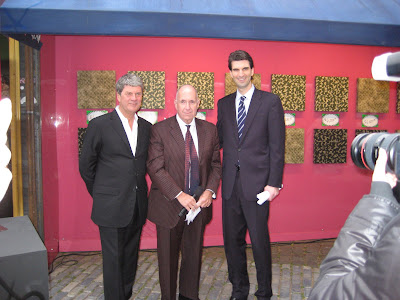 …he talked about the importance of protecting intellectual property. To be honest, I sympathize. Once you’re in the creative realm and start working hard to maintain a product, it really sucks when someone comes around and straight up steals your work, words, or designs. Can you imagine if someone launched a site called “The Fashion Explosion” and basically did the same thing I did?!? Or reproduced my posts (it’s happened before). Â It’s infuriating! But then again, if I were loony enough to charge y’all $1,000 to log on, wouldn’t I be asking to get ‘knocked off?’

The debate rages on.
Moving to the exhibit… 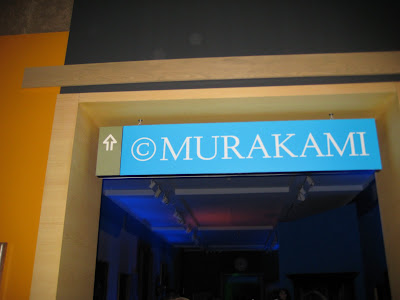 …it’s pretty dope. Â Not sure if you know this, but Murakami designed Kanye West’s album cover… 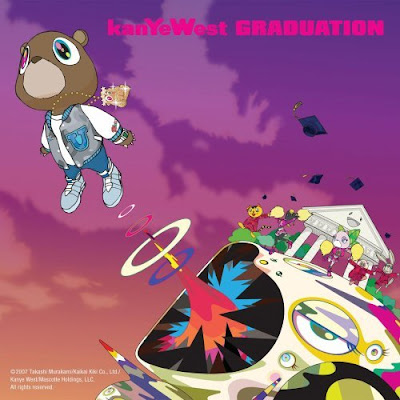 ..and a lot of his artistry reflects the same kind of space age, cartoon feel, but with a funny edge: 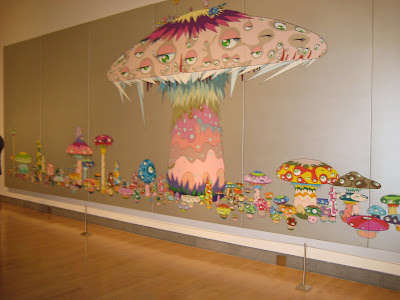 …lots of emphasis on eyes, mushrooms, and flowers, all painted in almost psychadelic pastel colors. It’s grown up art for the kids at heart. 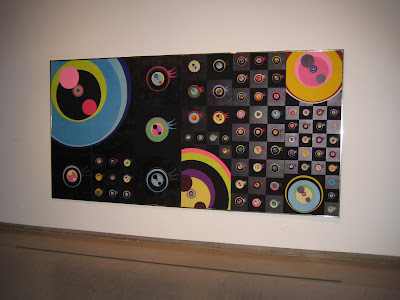 A must see! Check out more pictures (including my dress!) on the Fashion Bomb’s Facebook group. And join if ya haven’t already! If you have extra click time, also become a fan of the Fashion Bomb’s less maintained facebook fansite:)
*Reminisce on my post about fake bags. Hilarity indeed!

*Yo, Guy Trebay of the New York Times was also in the house… 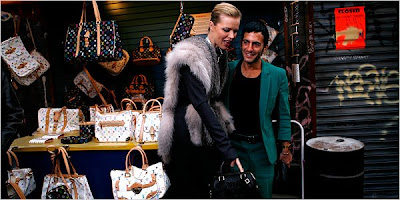