So all cell phones were silenced and talk ceased in my house last night for the Project Runway finale.

Within minutes we found out the result of the controversy from last week (i.e. Did Jeff cheat when making his clothes??) My sister and I were relieved when Tim said he was in the clear…but both thought it was sort of whack how the show (and LAURA) built the issue up to be such a big deal.

Anyway, though my absolute favorite personality throughout the whole show was Michael (obvs, he’s from the A), I was dissapointed in a lot of what he showed. I loved this dress: But didn’t care too much for these: 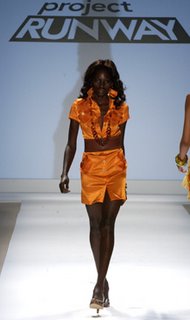 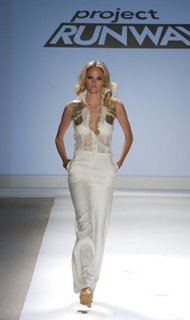 I mean why did he think that bright shiny orange would play well off a Vaselined up model? And the sequins, belts, tie up shirts, everything. was. just. a. mess. Let’s chalk it up to nerves because…Michael definitely ‘brought it’ during the season.

I was honestly surprised by how much I loved Uli’s collection: 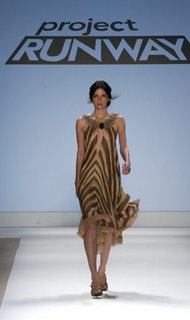 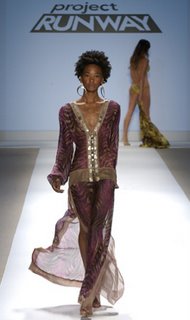 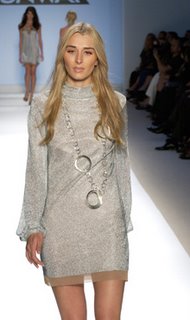 She still stayed with her prints theme, but then mixed it up with items like that silver sixties style dress. Don’t tell anyone but I sort’ve wanted Uli to win not just for her fashions, but also so that her hot model Nazri could’ve gotten her Elle photo shoot…

Moving on…
Though I think Laura’s personality leaves a lot to be desired, I love her classic, sophisticated aesthetic. Out of any of the designers, I think I would most likely buy her clothes. I adored this dress…I think it’d be perfect to go clubbing. 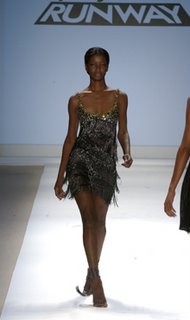 And my 20 year old sister said she would give birth, get married, and be buried in this dress: 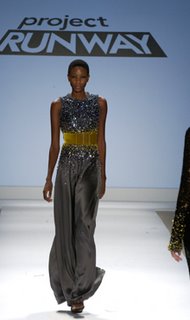 I personally loved the way the belt contrasted with the dress and the back! To. die. for.

Then Jeff’s collection. First of all, the music he was playing made feel like killing myself. Then, I thought his ‘Japanese Nightmares and Ghouls’ theme was questionable…and his collection was sorta luke warm for me.

These looks were just ok (they reminded me of stuff I could find at Diesel): 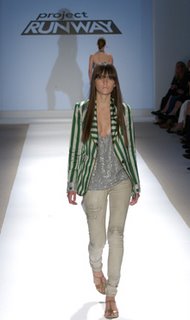 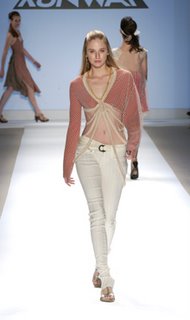 And I only sort of loved about 2 things: 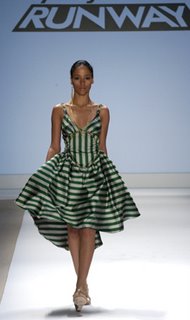 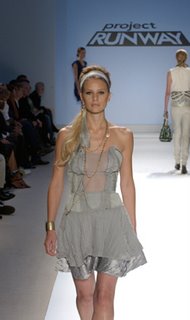 But nothing really made me gasp with glee (whereas with Laura and Uli, I think I pretty much could’ve taken everything home with me).

If I had to choose based on the final show, I probably would’ve picked Uli. Her styles were hot, young, and fresh.

Anyway I’m sad that P. Runway is over. But Shhhhh…don’t tell anyone, I’m interviewing Tim Gunn on Monday for another fashion story. I’m thinking I might veer off topic and ask him a few show related questions…but what!?!? I’m already nervous!
Y’all give me some ideas…

Smootches!
ps all pics are from P. Runway’s website at www.bravotv.com Tale of a Broken Heel