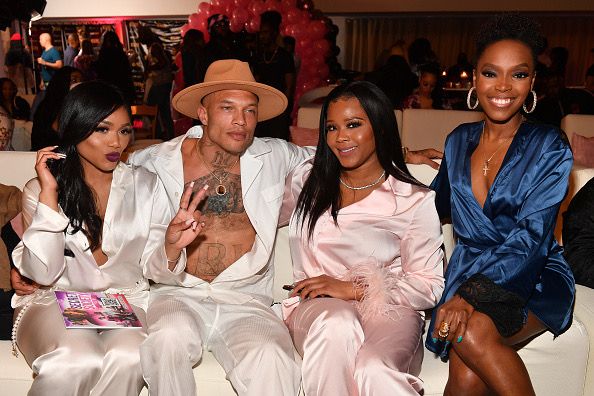 Fashion Bomb Daily was on the scene in ATL for the premiere of the newest movie known as Secret Society. The independent film is an adaptation of the 2007 book Secret Society by Miasha Coleman, who is also the executive producer of the movie. Celebrating its 15th anniversary, the book landed her with a six-figure deal along with a title as a best-selling author.

Directed by Jamal Hill, the film follows in the book’s footsteps telling a story of two women whose lives of luxury get turned upside down. The film is complete with intriguing fashion and shocking secrets executed by the stars of the film including Reyna Love, Erica Pinkett, Vivica A. Fox, Jeremy Meeks, Vincent De Paul and Tray Chaney.

To commemorate such a moment, Miasha Productions and Fashion Bomb Daily held a pajama-themed bash which also featured an exclusive premier of the movie. Let’s get into some moments from the event:

Representing for Fashion Bomb Men, Jeremy Meeks posed for a flick with Rich Coleman and an attendee.

Miasha and Rich Coleman posed with Mz Skittlez and @mrszothegoat.

You can catch Secret Society on Amazon on Friday, April 2nd! Will you be tuning in?