So I’m not gone quite yet, but there’s a lot of preparation (and packing) to do before an overseas trip! Thankfully Adriana stepped in today with a Style File on a bit of an unusual subject…

â€¦and, of course, she rocked the signature Brandy braids!
As Brandy moved into her late teens/ early twenties, her style took on a new mature, flirtatious edge and we began to see her in more bright colors, fitted pieces, and short hem lines: 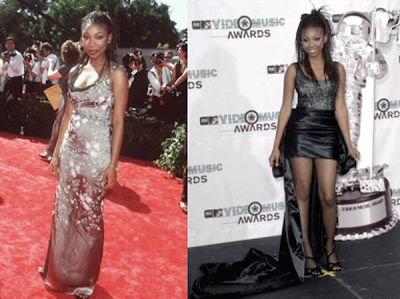 …And with the birth of her daughter, Syâ€™rai, Brandy entered full-fledged womanhood–all too evident in her fashion choices. Remember the flapper dress/gladiator sandal outfit she wore to the 2002 MTV Music Awards (two months after becoming a new mom?). She definitely made headlines… 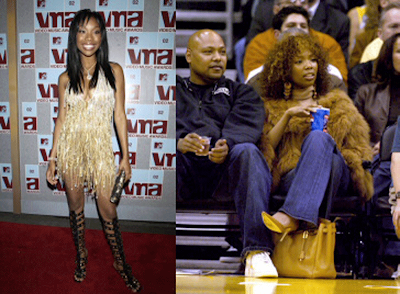 These days, Brandy prefers a look that incorporates playfulness, function, and sophistication. She chooses red carpet outfits that accent her waist and slender frame, and feature earth tones and â€œstatementâ€ accessories, such as necklaces and bracelets…

Her casual look still leans toward the youthful, and like any girl whoâ€™s young at heart she seems to prefer graphic tees and long loose hair, along with other laid-back pieces to complement the lookâ€¦

â€¦yet she definitely knows how to dress for a party or chic affair:

Itâ€™s been a treat to watch Miss Norwood grow up!
Get some of Brandyâ€™s looks with these pieces:

You need to give it up…

And I’m still drooling over the guy in this viddy…