Surprisingly, R&R showed some maturity in this collection, which deviated a bit from their usual focus on jeans and edgy casualwear. LOTS of dresses, tuxedo-style tailoring, and (especially) diverse textiles. The contrasts in this collection were not in the colors (the entire collection was done in harsh blacks and whites) but in the fabrics: leather that was so thin it appeared to be tissue paper, petal-like silk ruffles, and an unbelievable Lycra/spandex like acid wash print that was fashioned into denim-like leggings. Also, skinny jeans: still in. 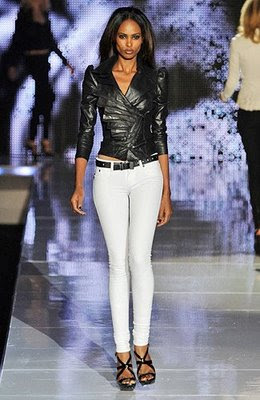 Apart from the label’s refreshing new look, the best part of the show was, of course, the music: edgy, pulsing rock blared from the speakers as models, including Chanel Iman, stomped fiercely down the runway in an atmosphere that felt more like a concert than a fashion show. Looking at the pieces, I could easily see several of them on rock style arbiters like Rihanna, Cassie, and Amerie. And kudos to R&R for having one of the most diverse shows in terms of models so far this Fashion Week.
Some of the best looks below: 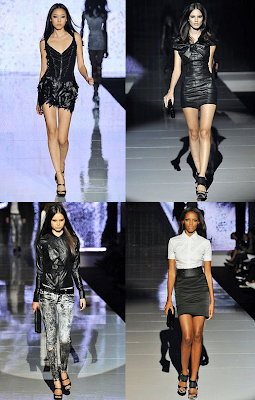