This weekend’s roundup started with a bang as several Bomb celebrities came out to fete the last days of summer at InStyle’s Summer Soiree. Star cameos were slim for the rest of the weekend, though we did manage to spot a few of the fashionable who haven’t made it across our paths at all or in a while–let’s take a look? 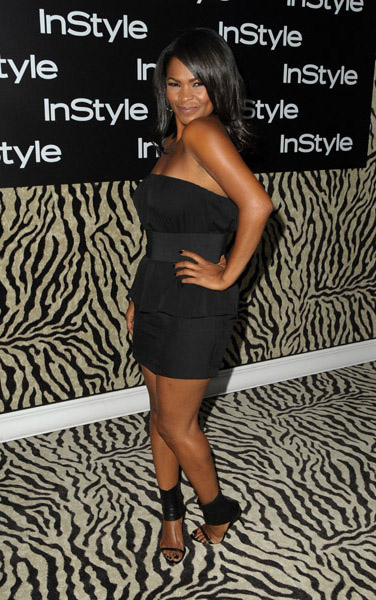 Actress Nia Long christened the zebra carpet in a black strapless peplum dress, belted seductively to showcase her small waist. Ankle wrap sandals topped off with a dark pedicure completed the look for the ravishing mom and PETA spokesperson. Style Subject Lala Vasquez joined the ‘all black’ train in a strapless romper with a studded Carrie Bradshaw-esque belt. Unlike her colleagues, she stepped her look up by adding a red clutch and suede ankle boots with rhinestone sole details. A Hot look for this budding stylista.

Covergirl Dania Ramirez departed from all black, holding fast to the vestiges of summer in a strapless white dress with an eyelet hem and peep toe yellow pumps. Neutral makeup and simple accessories complete the look for this certifiably Hot bombshell. In another part of town, Pussycat Doll Melody Thornton put her best Louboutined foot forward at The Ludacris Foundation’s Summer Splash in Malibu. The monochromatic nude ensemble is a nice contrast to her caramel skin and honey-colored highlights, and she offsets it with both diamond and gold jewelry. It’s one of the more put-together looks I’ve seen her in–while there’s nothing glaringly off about it, it just feels a little plain, though, Hmm… British singer-songwriter Alesha Dixon showed up at the UK’s Hylands Park V Festival in an otherworldly, Sasha Fierce-meets-Bootsy Collins stage costume. Alesha’s known for her sassy, kind of offbeat fashion sense, of which this piece is a perfect example. I wish they’d gotten a full pic of her outfit to check out those blue and pink striped booties! Finally, actress Tatyana Ali put in an appearance at the Millennium Momentum Foundation’s Launch of their City Of Opportunity Initiative in a simple, block-colored sheath dress with strappy gold sandals and light tan clutch. Certainly a respectable outfit but not exactly the most exciting choice for a pretty young woman such as The Fresh Prince alum. Style-wise, Tatyana has always reminded me of Ananda Lewis, and not just for their similar skin tone and hair. I’ve often felt like both women’s fashion choices fall far below what they could be bringing given their already bountiful natural beauty. Then again, some women just aren’t into fashion and prefer to let their work speak for them. But as a celebrity, do you somewhat have a responsibility to look the best you possibly can? Where do you draw the line between wearing what you want and what your public expects of you? Hmm…
Something for all you fellow celeb style watchers to think about to start off your Monday!
~Adri