*The Countdown begins for my LA Excursion!!! 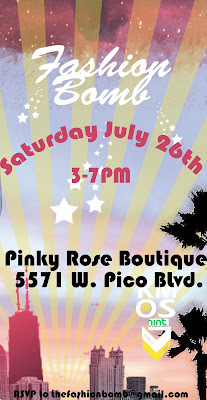 Tell all your West Coast Fashion Heads to roll out to Pinky Rose Boutique (5571 W Pico Blvd) for cocktails, shopping, and performances…I can’t wait!
*There’s a huge article on media giant Conde Nast in the New York Times. If you don’t know, Conde Nast owns a lot of the glossy magazines: Glamour, Vogue, Vanity Fair, GQ, and the New Yorker. Speaking of which, I’m sure a lot of you heard the buzz about that controversial Obama cover. 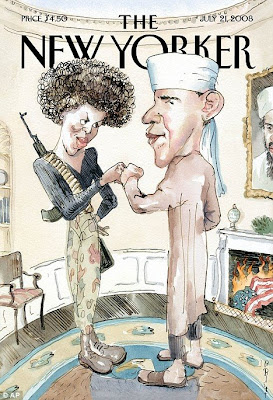 I decided to keep mum on the issue because I’ve gotten a bit tired of complaining. But the NY Times article reveals something interesting about CondÃ©, its owner Si Newhouse, and the company’s decision to use that cover: “More than almost anything else, acquaintances say, Mr. Newhouse delights in the buzz his magazines routinely create. He welcomes controversies, like the recent brouhaha about the Obamas-as-terrorists cover of The New Yorker. What tickles him often challenges convention, often embraces the new or novel, and often sells.”
You see, people, they’re just trying to sell magazines. Times are tough out there for print pubs (blame the internet)…I think the Vogue Lebron cover and the New Yorker cover were purposefully controversial because they just want a little attention. Pay no attention people. Though I must admit, the New Yorker, cover aside, is my absolute favorite magazine. [NYTimes]
*Speaking of magazines using ‘novel’ ideas to sell, yes, it’s true: The Fashion Bomb Shop completely sold out of July Issues of Italian Vogues within 12 hours of posting their arrival….

I know!!! I’m going to check back today to see if I find any more copies, but I’m keeping my expectations low. When I went in (moments after the shipment arrived), I saw another fellow fashionista in there buying 5 copies for herself! But you never know…I will post all progress here. Don’t worry, I got you.
*Wow, that NYTimes article about Conde Nast just keeps getting better! An interesting tidbit that might make you think differently about your purchase of Italian Vogue:
“Almost half of Conde’s revenue last year was generated overseas, according to several executives…The luxury approach has worked even better overseas, where Conde has found untapped markets for versions of Vogue, Vanity Fair and other titles. The Italian Vanity Fair, introduced just five years ago, had more than 6,000 ad pages last year” far more than any magazine published in the United States ” and more than $100 million in revenue, according to Jonathan Newhouse.” Hmmm, I wonder about Italian Vogue? Is Conde Nast using race as a fulcrum to generate sales? This and more to ponder. [NYTimes]