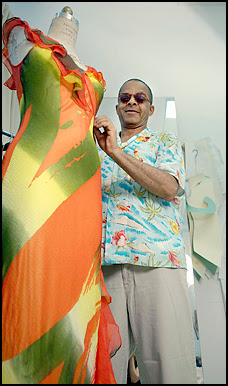 The first African-American designer to reach international acclaim. I actually wrote about him before, but decided to visit his story again. Burrows was huge in the 70’s and is now making a comeback with a lower priced line in the ’07.

I love the colors!
Anyway, I contacted Mr. Burrows, who was nice enough to interview *exclusively* for the Fashion Bomb (how cool!). Below, he tells us about his new line, how the fashion industry has changed, and offers style suggestions for the chic yet challenged. Enjoy!
1. I read in Women’s Wear Daily that you’re introducing a lower priced line. Can you tell me a bit about it?
The Stephen Burrows World collection is the every day girl collection. It’s urban dressing to fit your lifestyle; body conscious clothes with an ease of fit for comfort. The colors are somber this time, not as bright as usual, with a deep, rich palette of Mulberry, Cocoa, Steel Gray, Indigo Blue, and Poppy Red. It goes for $293-$350.
2. How has the world changed for designers? Is it easier now than it was in the past?
The business used to be more personal. Buyers had more power then. They really don’t have that now. It’s all computerized, so it’s not as easy to get started as it was back then. It also takes 5 times as much money to get started, so it’s a problem to find funding.
3. Other that you, who are your favorite designers? Why?
I love Azzedine Alaia, Jean Paul Gaultier, and Patrick Robinson. I like them because they have their own look and you can tell it’s them. They stick to who they are design wise.
4. If you weren’t a designer, what would you be?
I was going to be an art teacher. Painting, drawing, sketching, that’s what I did. And that’s what I wanted to teach. Until I got to college. Then you have to differentiate what you want to major in. I liked fashion illustration and I thought I’d rather create fashion. So I switched to the Fashion Institute of Technology.
5. What current trend would you like to see disappear?
The current trend is ugly clothes. Just ugly clothes. Very amateurish ugly things thrown on it. It’s just a mess. When they were the worst was the 80’s. The bullet shoulders and all that glitter and it was all very Donald Trump. Too glittery and too flashy. I loved the 70’s on the other hand. There was a lot of invention, a lot of experimentation which I don’t see going on now. Knits were a big thing. I’m a big proponent of knits because of the comfort factor. The 70’s were a very inventive time.
6. What’s your favorite trend of all time?
Color.
7. Any advice for women trying to dress their best?
Don’t be a fashion victim. Don’t try to do everything. Be your own person. Shop everywhere. That’s what great about fashion. People can put pieces together and make their own style. It could be a bunch of rags…As long as you do it well, it’s your style, you carry it, and it’s done.

What a perfect ending to Black History Month! Learn more about Stephen and find out where you can buy his collection at www.stephenburrows.com.

Thus concludes The Fashion Bomb’s Black History Month Designer Series. While I haven’t covered *every* black designer ever, I hope you learned a little bit about the important, yet seldom acknowledged contributions blacks have made to the world of fashion. And with that…
Large, overflowing, delicious flutes of champagne to…

“Suddenly all my ancestors are behind me/ Be still they say/ Watch and listen/ You are the result of the love of thousands.”–Linda Hogan, ‘Walking’ Sai Sankoh Releases Her Portrait of a Lady Resort 2020 Collection