Why??
The rules clearly stated that Rihanna was ineligible. But you made your opinions known, and the power of the people prevailed. Who am I to argue?
It looks like Rihanna is yet again Fashionista of the Year, coming in first place with 44.3% of the Fashion Bomb vote:

How did this Chic Queen manage to prevail for both 2007 AND 2008?? You guys said, “It seems that she stepped her game up even MORE in 2008, so I have to give it to her. I will give honorable mention to Cassie though. But RiRi Reigns.” “Rihanna hands down, she was better than last year and better than all these girls put together, they need to learn a thing or two from her…”

“…I’m not a fan of Rihanna, but props need to be given where props are due…she definitely held it down fashionably in 2008. She is a trendsetter and I can see her holding down the title of fashionista for a while.” “Hands down Rihanna wins. She has so many more hits than misses and everyone is finding themselves “inspired” by her style choices...”

I feel you! This year I wanted to usher in some new fashion royalty, but it was not meant to be. We may not bump her songs, but in the style realm, Rihanna still holds the #1 spot. Whether lunching at Da Silvanos or hitting up a red carpet event, this young popstar exudes style in everything from strapless dresses with accents of animal print to corsets worn with jodhpur pants. It’s obvious–this Caribbean Queen wears fashion down to her fingernails. 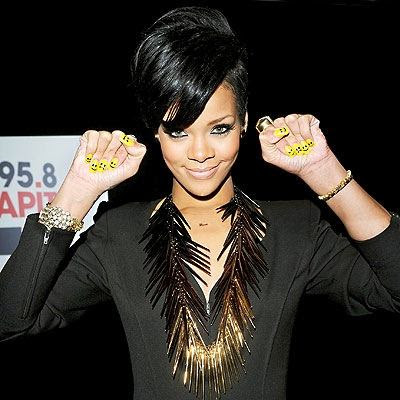 And we love it!
For the men, there wasn’t as much of an upset, and rapper Common took the title home in a landslide with 39.9% of the vote:

Neither of the Fashion Bomb’s two male readers gave any insight as to why, but I’m sure it has everything to do with Common’s cool aesthetic and mean suit game.
So that does it for the Most Fashionable in ’08. Stay tuned for even more end of the year fabulousness!
Bisous!